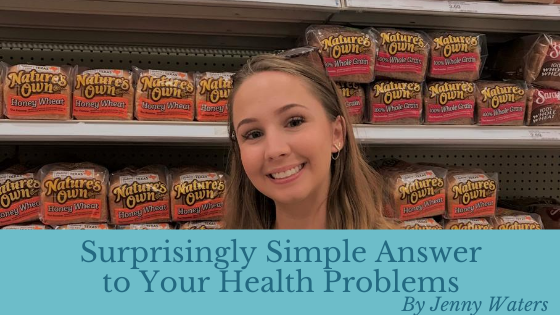 SOMETHING YOU’RE EATING may be compromising your health, and you probably don’t even know it!  Going gluten free can be life-changing for your health.

I’m sure you’ve heard of gluten, but most people just think it only affects people with celiac.  We used to think so, until we experienced firsthand what gluten was doing to our family.  If you have an autoimmune disease or chronic inflammation, you are very likely intolerant to gluten.   Did you know that gluten could be damaging your gut lining without you ever experiencing any gastrointestinal symptoms?

Read about my daughter Katelynn’s experience and learn some surprising warning signs of a gluten intolerance to  help you or someone you love!

My daughter Katelynn has agreed to let me share her story of gluten intolerance with you in hopes that it might help someone else.

Ever since my daughter Katelynn was in 3rd grade, she has had itchy blisters on her knees, elbows, ankles, shoulders, or forehead.  Any bump or bruise she got would result in the itchy blisters as well.

For a while, I was afraid she was just scratching too much and making them into scars.  She’d sleep with band aids on them or wear gloves to bed.  She was embarrassed in school when they had to sit on the floor and her ankles and knees were covered in scabs.

Katelynn is conscientious about skincare, so she followed all the steps even though it burned her skin.  When she started drill team in high school, she got the blisters along her hat line.  High school is not the time to have skin problems!   She wanted clear skin so badly.

Doctors Diagnosed it as Eczema

I took her to 4 different doctors to find something to help.  They each told us it was eczema and gave us some expensive cream or skin regime to follow.   Usually these treatments would sting a lot, but she followed the plan.  Katelynn has been religious about her skincare, but it didn’t make a difference.

It was such a mom fail for me.  I always believed doctors knew everything.  I still trust doctors immensely, but they don’t always know about the effects of food.  I’ve learned that loud and clear with my husband Brady’s experience and now Katelynn’s experience.

The doctors didn’t really ask many questions and gave her skin a passing glance.  No one ever suggested it could be food related.  I wouldn’t have thought of it unless we’d seen how food affected Brady’s autoimmune issues.  If your gut is telling you that the doctors are missing something, listen to it!  Sometimes the answer is as simple as a food intolerance!

So, 2 years ago, I suggested to Katelynn to try eliminating gluten, since it had such a profound effect on her daddy.  Katelynn reluctantly went gluten free for 21 days, even though she was convinced it wouldn’t help.

Teenagers don’t want to admit parents know thing, but she was tired of fighting her skin issues.  She was already used to eating gluten-free for dinner with us.  She just had to change her breakfast and lunch.  It wasn’t hard during the summer while she was home.  The challenge would come when school started back up.

After the 21 days was over, she wasn’t admitting that she felt differently.  She hadn’t had stomach issues before, so she didn’t feel differently.  The AHA came when she back to drill team and started eating the sandwiches and Chic-Fil-A meals for lunch.  Her skin blisters immediately came back.

She Finally Had An Answer

Before telling me and admitting that she might have a gluten intolerance, she did a deep dive into Dr. Google.  She found pictures that matched her blisters and figured out that Duhring’s disease (dermatitis herpetiformis) was what she had been experiencing.   The bumps and blisters are similar to herpes lesions but are NOT caused by the herpes virus.  They are caused by gluten ingestion.  She was sad about having to give up gluten, but once she knew the consequence it was never a temptation again.

That’s the thing that most people don’t realize about food intolerances.  When you know the consequence of eating it, you can make an informed choice whether it’s worth it.  Usually it never tastes good enough to compromise your health.

Katelynn has thrived as a gluten-free eater.  She has been a great resource for friends that have gluten issues as well.  She is an amazing gluten-free baker, which her daddy loves!  She has found a way to enjoy foods more.  She readily admits that she eats better food now that she’s gluten free.  Cheap fast food cannot compare to good whole foods.  She also doesn’t eat a lot of the processed “gluten free” foods.

Her beautiful skin stays clear and her scars have lightened.  It has been completely worth breaking up with gluten!

Going Gluten Free Was Worth It

The hardest part about going gluten free for her was the judgements and teasing from her classmates.  She also hates when people told her that the blisters were just acne.  If it had been acne, the dermatologist would have been able to help.  People that don’t have food intolerances (or know about them) think she’s being high maintenance.  Her skin tells her pretty quickly if there’s been cross contamination.

Usually people are discouraging about gluten-free because they’re afraid to give up the convenience foods- bread, pastries, crackers.  When you figure out you have an intolerance, it becomes more about what you’re gaining instead.  Clear skin, energy, less joint pain, better sleep, clearer thinking.

Katelynn just celebrated 2 years of being gluten free.  Her skincare routine is so simple now- wash and moisturize.  No more lengthy process to try to heal her skin!  It’s been worth it to her to break up with bread forever!

For an easy meal plan to go gluten-free for a week, try out my Paleo Meal Plan!

So, are you curious about the signs of a gluten intolerance?  You might be experiencing them and not know it’s a gluten reaction.

Common signs of a gluten intolerance:

Just because you have one or more of these symptoms doesn’t mean you have gluten intolerance but it’s definitely worth investigating.  I wish we had known sooner and saved my daughter Katelynn and my husband Brady years’ worth of suffering.

Most people think that going gluten-free means a life of tasteless food.  It’s been quite the opposite for our family.  After cutting gluten and processed foods, our taste buds are more sensitive to real spices again.  Our food is very flavorful and delicious.  We don’t eat imitation gluten food.  We eat food that never had gluten in the first place.

The best way to test for a gluten intolerance is to get off of it for a few weeks and then test your reaction to it.    This is what I coach people through in my Aging to Amazing program.  When you know how it makes you feel, you can make an informed food choice.

“An estimated 99 percent of people who have a problem with eating gluten don’t even know it.  They ascribe their ill health or symptoms to something else–not gluten sensitivity, which is 100 percent curable. ”  Mark Hyman, MD

A gluten sensitivity can be causing leaky gut and inflammation, so it’s worth figuring out!  Gluten is wheat, barley, rye, oats (unless labeled GF), spelt and can be found in breads, pastas, and lots of packaged foods.  Check out www.celiac.com for a complete list of foods that contain gluten, as well as often surprising and hidden sources of gluten.

If you have a small suspicion that gluten isn’t serving your health, I would highly recommend trying a gluten free diet.  It has made all the difference in my family’s health.

If you would like help with what to eat and how to eat a gluten free diet, check out my Aging to Amazing Program.