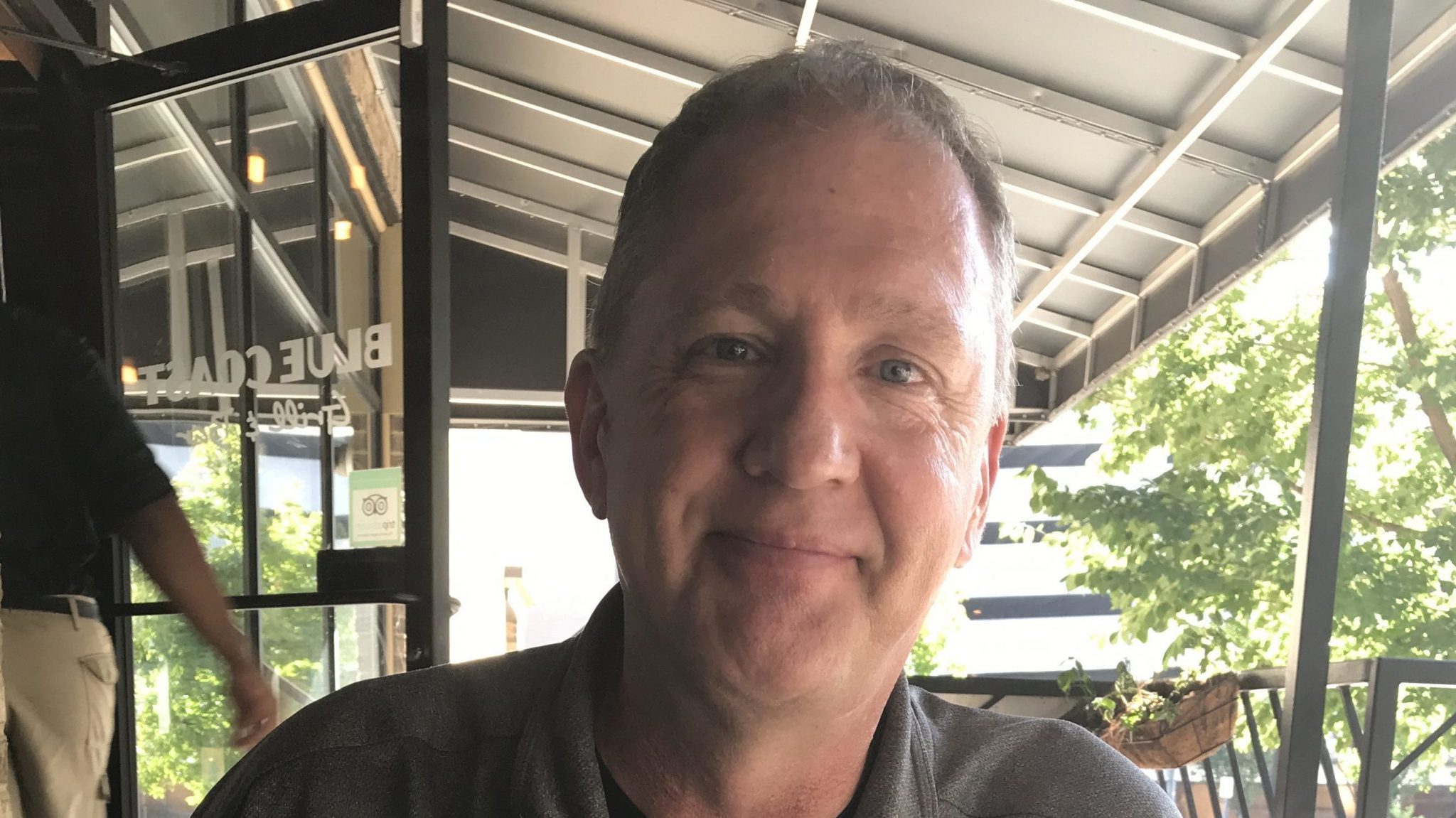 Brady grew up in West Texas. Home of Friday Night Lights, giant chicken fried steaks, lots of dirt, and wind. He grew up on a farm surrounded by family and big family dinners. Where I was a picky eater, Brady was not. He loved all food. His metabolism kept him skinny. He loved meal time and snacked on candy bars and Dr Pepper throughout the day.
Brady loved sports and played football in the fall, basketball in the winter, and baseball in the spring and summer. Exercise was always a big part of his life. As with most year-round athletes, Brady had his fair share of injuries, and he’s broken more bones than I can remember. When a change in weather is coming, Brady’s body tells him first.
In West Texas, there is a lot of dirt (and other stuff) blowing in the wind. At pretty consistent times each year when he was growing up, Brady would get bronchitis serious enough that would land him in the hospital and on a round of antibiotics.
When Brady was 16, his dad passed away suddenly of cardio myopathy at the young age of 39. Brady’s paternal grandfather had died of heart disease at 47, so family health history was not looking good for him.
When we met in college, Brady was in prime shape as an athlete and was always hungry. Since he was on a limited budget, he had to buy cheap food…a lot of cheap food…to fill him up. He used his Fry Daddy deep fryer to make it taste better.

After college, we got married and I started cooking. Brady had tried to gain weight to build more muscle all during high school and college. Well, that weight started coming with my cooking and with the drop off in exercise that is common when starting full time work.

With his family history of heart disease, I made sure he saw a doctor regularly. He was put on cholesterol medicine in his early twenties. By the time he was in his late 30’s, his blood pressure started skyrocketing. After a stress test at the cardiologist and sky-high blood pressure, he was sent to the hospital for an angiogram. He didn’t have blockage but super high blood pressure (237 over 195…so, yes, super high). It took a lot of trial and error to settle on the right dosages of blood pressure medicines. He even tried following the American Heart Association diet, but it didn’t seem to make much difference.

As the years went on, Brady continued to gain weight. When his joints weren’t hurting too much, he’d play basketball at the gym for exercise. The medicines made it more of a struggle to be motivated to play. He grew up believing that if you feel bad, just eat to feel better. He wasn’t feeling good so he self-medicated with candy bars, Dr. Peppers, and fast food. I tried to get him to “diet” with me, but he just wasn’t interested in being “starved” as he believed he would be.

When Brady was 44, his mom was diagnosed with Rheumatoid Arthritis and started taking Methotrexate (a chemo drug) to suppress her immune system. It was hard watching her be in such pain, and the side effects of the medicine weren’t fun. Meanwhile, Brady continued to gain weight, and his joints were hurting more and more. He just attributed it to aging and all his previous injuries.

In 2016, the pain was too much to ignore. He is a salesman and shaking hands is a big part of his day. The pain in his hands and fingers was so bad that he dreaded shaking hands. After comparing notes with his mom (and a LOT of encouragement from me), he decided it was time to see a rheumatologist to get tested for Rheumatoid Arthritis.

He was diagnosed with Rheumatoid Arthritis, Psoriatic Arthritis, and had borderline results for Lupus. We got this news the day my dad went into the hospital for the last time. We were dealing with grief and this new depressing diagnosis.

Autoimmune diseases don’t have a cure. Once you have one, you are more likely to get another one. The medications to suppress your immune system have serious side effects, tend to work for awhile, and then you have to try different ones.

Brady started taking Methotrexate (common chemo drug) and Plaquenil (a drug used to treat Malaria) for his autoimmune diseases. Methotrexate wiped him out every weekend and took 3 months to start relieving the pain. It was changing our life as a family. Brady would have to sleep most of the day every Sunday after taking the Methotrexate on Saturday nights.

Meanwhile his blood pressure was getting high again even on his medications. His cardiologist, who he saw every 6 months, told him to limit his salt and clean up his diet. Brady started reducing his salt and trying to eat better but didn’t see any difference in how he felt.

There has to be a better way

After a year of him being on these harsh medicines, he was in less pain, but he kept gaining weight, he was completely exhausted and was losing strength in his muscles. I had been transforming my health and just knew there had to be something we could do to help Brady feel better naturally.

I went with him to his next rheumatologist appointment to ask questions. I’ll be honest – I didn’t trust Brady to ask about diet and exercise because he really didn’t want the answers. I asked her what he could do with his nutrition and exercise to feel better. I remember clear as day her telling us that she had not seen much success with diet to help autoimmune diseases. She had only seen results with medication and the results weren’t a cure.

This information didn’t sit well with me. Brady was too young to feel as old and tired as he did. We were about to be empty nesters and I wanted to have an active, fun lifestyle with Brady.

I started researching holistic nutrition and eventually found the AIP diet. This is the AutoImmune Protocol diet. I learned how inflammation and a leaky gut contributed to autoimmune diseases. I kept sharing with Brady everything I was learning. He felt too bad and wasn’t super excited to try some diet that would be hard.

I knew genetics could play a role in autoimmune diseases. So…I pleaded with Brady to try the AIP diet…if not for himself maybe he’d do it for our daughters. He finally…reluctantly…agreed to try the diet just to appease me.

The way the AIP diet works is you eliminate anti-inflammatory foods for 30 days and then one by one test them individually to find your trigger foods. Brady was very sad to see bread and sugar off his list, but he committed to sticking to it. The girls and I prayed that he would start seeing results quickly so that he would stick to it.

Our prayers were answered! The first week was hard adjusting to the new way of eating, but he did start noticing a little relief. By the 2nd week, he was definitely feeling better and starting to believe there was something to this. When his 30 days was up, he had lost 20 pounds and was already feeling better than he had in years.

He started testing foods. It quickly became evident that gluten was his biggest trigger. His throat would swell and he had trouble breathing. That was enough for him to know that he shouldn’t be eating it.

Over the last two years, we continue to tweak what he eats. Things that were initially on his avoid list can be eaten on occasion. The best part about this way of eating is that he knows how food should and shouldn’t make him feel. He’s learned to listen to his body.

To date, Brady has lost 50 pounds without ever having to “starve”. He eats steak and sweet potatoes regularly and never feels like he’s suffering. His joint pain has decreased, and his energy level and sleep quality have improved drastically. The best part is that he was able to get off Methotrexate! He got his weekends back!

All totaled, between autoimmune medicine and blood pressure medicines, he has been able to reduce his medications by 50 pills a week. He now only has to see his cardiologist once a year, and he just got extended to seeing the rheumatologist 3 times a year instead of 4 times. His doctors are amazed. They tell him that they don’t know what he’s doing but to keep doing it.

Brady has been shocked at how many people are suffering from Autoimmune Diseases like him or know someone who is. He continues to share his story and offer them hope.

I knew more people needed help to learn the new way of eating. When I saw the opportunity for the certified Nutrition coaching program from ITN, I knew I had to do it.

I am now a Certified Transformational Nutrition Coach. With my training and our personal experience with nutrition, I feel called to help others find their personal way of eating that optimizes their health. At first it isn’t easy because we’ve been trained by the food industry to eat for quick pleasure and be addicted to processed foods.

I can ease the process from what I’ve learned over the years. The results are so worth it! I got my husband back, and we went hiking in the Smoky Mountains for our 25th anniversary. Brady doesn’t have to go sit in the recliner at the end of each day. He feels good and looks good! He says he feels 20 years younger. I am now looking forward to our empty nest, because Brady is ready for adventures with me!